Set up your fishing trip here! 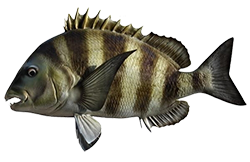 The strangely named sheepshead variety of fish inhabit bays and estuaries, and it is not uncommon for them to enter freshwater. Some other common names for sheepshead are convict fish and baitstealer. These fish are located throughout the gulf region and are commonly found near rock jetties, piers, and pilings. While sheepshead have an estimated maximum lifespan of 20 years, they are commonly thought to live no longer than 13 years for males and 16 years for females.

This sizable fish grows to an approximate maximum length of 36 inches and can weigh up to 20 lbs. Males reach sexual maturity between 2 to 3 years, while females begin spawning between 3 and 4 years. Females typically grow faster than males.

For feeding, adults favor rocky reefs, shipwrecks, oyster beds, and pilings, while juveniles feed in grass beds and over muddy bottoms. The species uses its teeth to pick up and crush shellfish. An omnivorous species, the sheepshead diet consists of mollusks, crustaceans, barnacles, and plant material like sea grasses and algae.

With a wide range of habitat and migration, sheepshead are distributed from Nova Scotia to Brazil. As a year-round resident of the North-West Atlantic Ocean, they are absent in the Bahamas and West Indies. The fish stay mainly near bays and estuaries, but they do have a significant seasonal migration. Sheepshead also spawn offshore, though they tend to remain near the coast.

The species is considered secure in the United States; however, it is critically imperiled in Canada.

A Gulf Shores fishing adventure is waiting for you.

It’s time to get your Fish On!

What our clients are saying about us...

One word! Awesome!!!! He Worked hard to make the trip the best it could be. Went above and beyond what he should have. He let us sit there and watch the blue angles practice when he didn’t have too. Are time was up. Great fishing trip! Something I will never forget. Thanks Scott!!

Best fishing charter myself and kidos have had. Captain Scott is great and excellent in helping kids, could not have been any better. I would recommend him to anyone that wants to go fishing!!!! Thank you Captain Scott.

Truly enjoyed the experience and Captain Scott's experience in locating the fish and we caught a variety of fish. Plan to do it again the next time we return. Thanks!